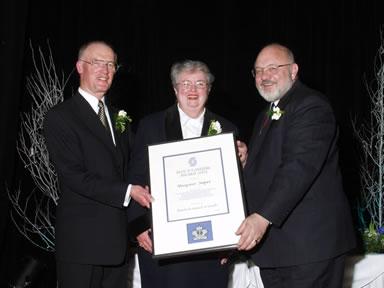 Margaret Soper (photo, centre) is the 2001 recipient of the Jean P. Carrière Award accompanied by Hugh Krentz, Chair of the SCC (left) and Peter Clark, Executive Director of SCC (right).

Today, Mrs. Soper is one of the most dedicated members of the Consumer and Public Interest Committee and the CAC/COPOLCO. She devotes herself to activities that are important to her and follows through on her commitments. A valued and respected colleague by her fellow committee members, Mrs. Soper takes time to mentor new recruits by maintaining regular communication with them and encouraging them to take on new roles.

Mrs. Soper has also contributed to the work of CNC/IEC for the past 12 years by bringing the consumer perspective to the table and by assisting the group to come to full consensus decisions, even on contentious issues. At the international level, where IEC members are dominated by industry interests, Canada has been able to present, with Mrs. Soper's unfailing contributions, a more balanced contribution at the governance level. Mrs. Soper has always found ways to accommodate divergent interests at CNC/IEC discussions while ensuring that consumer needs were appreciated and taken into account. She leads by example in achieving consensus with dignity.

Mrs. Soper has earned the admiration of colleagues because of her knowledge on issues, her preparedness for discussions, her skill in organizing her delegation, and her abilities as a goodwill ambassador for Canada. She has had, and continues to have a significant impact on standardization in Canada while always keeping the interests of the consumer at the forefront of her work.