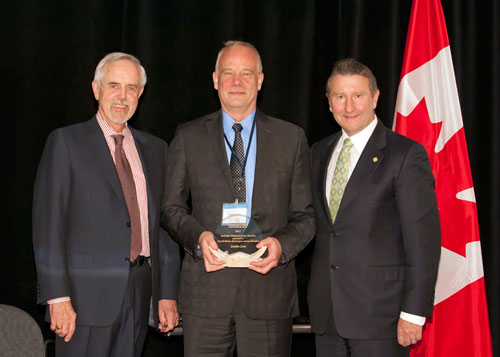 Stephen Cross (photo, centre) is the 2012 recipient of the SCC Award of Excellence. He is accompanied by John Walter, SCC CEO (left), and Dr. W. A. Sam Shaw, SCC Interim Chair (right).

Stephen Cross enjoyed a 13-year career with the Standards Council of Canada (SCC), where his experience, abilities and knowledge contributed to the extensive development of Canada’s standardization network. Mr. Cross began his career with SCC as senior program officer for the Certification Body Accreditation Program. In 2001, he was appointed manager of Program for the Accreditation of Laboratories/Canada (PALCAN). In 2003, Mr. Cross was appointed manager of Certification Body Accreditation, and in 2009, director of Conformity Assessment/Accreditation Services. Later in 2009, he became vice-president, Accreditation Services, a position he held until retiring from the organization in June 2012. In that position, Mr. Cross oversaw the operation and development of various accreditation and recognition programs, such as the program for the accreditation of product certification bodies and Laboratory Accreditation.  Acting as the designated Canadian representative to numerous international and regional committees and forums, Mr. Cross has distinguished himself among and earned the respect and appreciation of staff, colleagues, clients and external stakeholders.  Before joining SCC, Mr. Cross was technical manager at TerraChoice Environmental Services Inc., for Environmental Choice, a product certification program leading to Canada’s eco-label. He also worked as a technical underwriter in the commercial insurance industry, which involved applying quality management principles to manage risk.