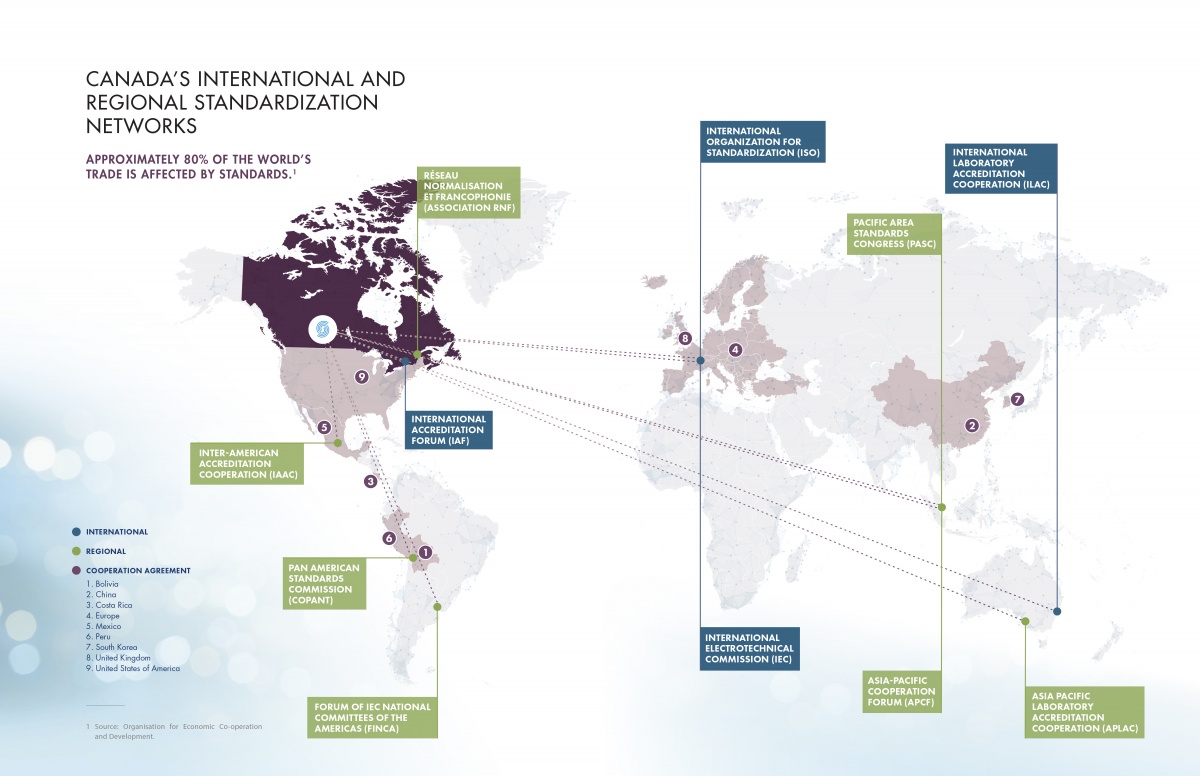 As governments around the world look to standards and accreditation as a way to improve their competitiveness, SCC’s international activities will remain critical to ensuring that standardization continues to help fuel Canada’s economy.

SCC plays a critical role in supporting Canadian businesses, particularly innovative organizations, as they expand and enter new export markets. By collaborating with and taking on leadership roles in national, regional and international standardization bodies from around the world, SCC helps to facilitate the trade of Canadian goods and services with these countries.

By taking on international leadership positions and being involved in key standardization committees, Canada has considerable input into governance and policy at the international level. This enables Canadian participants to improve Canada’s ability to compete globally by influencing and shaping marketplace rules. SCC’s CEO John Walter was elected as the president of ISO and began his two-year term on January 1, 2018.

Chantal Guay, SCC’s Vice-President*, Standards & International Relations, became a member of the PASC Executive Committee in September 2017. She is also the Convener of the Strategic and Regulatory Group (STAR) with ISO’s Committee on conformity assessment (CASCO), through which she participates in the Chairman’s Policy and Coordination Group (CPC) of CASCO. The CPC coordinates the technical work of CASCO and assists the CASCO Chair in identifying strategic conformity assessment issues.

Regionally, SCC continues to reinforce its relationships with the Pan American Standards Commission (COPANT) and the Pacific Area Standards Congress (PASC), regional organizations that comprise the National Standards Bodies with membership in the International Organization for Standardization (ISO). In spring 2017, SCC hosted the annual meetings for both COPANT and PASC in Vancouver.

SCC is also a member of the Asia-Pacific Cooperation Forum (APCF) and the Forum of IEC National Committees of the Americas (FINCA), which represent the common regional interests of their member nations’ concerns at the International Electrotechnical Commission (IEC).