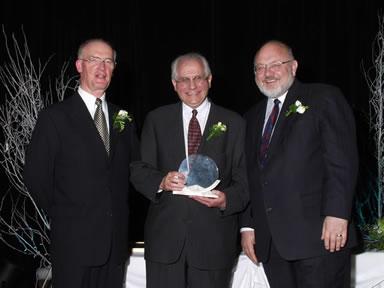 Mr. Husseini joined the Canadian Standards Association in 1988 as a Project Manager in Public Safety. He coordinated the intensive consultation work to define basic requirements for international environmental management standards, and was instrumental in the establishment of the ISO Technical Committee 207. He also played an active role in helping to obtain the Secretariat for Canada. In 1998 he became the Secretary for TC 207 and still holds that position today. His leadership, energy, astute judgment, and diplomacy as Secretary of the ISO/TC 207 have contributed immensely to the progression of the ISO 14000 series of environmental management system standards and, morerecently, the initiation of ISO activities in the area of climate change. He has been a key player in facilitating strategic initiatives towardscompatibility of ISO 9000 and ISO 14000 standards. Mr. Husseini's unique interpersonal skills, combined with his passion for the consensus process, have fostered a worldwide interest in the ISO 14000 series of standards which support ISO's commitment to sustainable development. During his term as TC 207 Secretary, he has delivered numerous presentations, prepared articles, and developed relationships with key representatives from governments, organizationsand standards bodies throughout the world. He is an enthusiastic and effective ambassador for the SCC, CSA, Canada and standardization.